Melvyn could draw from the time he was six years old. Teachers always encouraged him with art projects and in high school he would help friends with art earning some pocket money along the way.

When he left school he picked up sign writing whilst labouring at a sign company and then found work as a ticket writer. This eventually led to working for one of the largest Department stores in South Africa as a display artist.

Due to segregation laws at the time he then tried his luck overseas in London and managed an art studio for a chain of 84 retail shops in the UK. After 11 years here he migrated to Australia and became a self employed graphic designer.

His natural artistic skill and desire to share this with others has paved his life path. He uses all mediums and is a realistic painter. 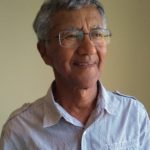 Below is a list of Melvyn's classes which are currently running. Please check back as this list will be updated each term.